Carotone Black Spot Corrector Cream (BSC) is the bomb when it comes to getting rid of dark spots, blemishes, melasma, sunburns, freckles, white patches, blackheads and all discoloration.

This cream also clears pigmentation, softens, smoothens, lightens and brightens your skin. It is formulated with very powerful ingredients that nourishes, refreshes and moisturises your body.

I have been hearing about carotone face cream for long and most of the comments are positive. So after my last breakout, I decided to try it and find out for myself if it is truly worth all the hype.

Yes, carotone face cream lightens your skin and clears dark spots from the face and other parts of your body. It is very good for fair people but is not recommended for dark and chocolate skin.

Anyone can use it to clear their skin problems and discontinue it afterwards. Only fair people can continually use carotone as their everyday cream because it won’t stop lightening the skin.

I highly recommend this carotone face cream to anyone who wants to lighten and brighten their complexion and also get rid of skin problems. It really works and your skin will be grateful to you.

PS: Carotone black spot corrector is enemies with sun and heat. So make sure you avoid any sunlight, fire and steam when using it. Or better still, use it only at night to prevent side effects.

It doesn’t have any side effects.

How Good Is Carotone Face Cream:

It is a good face cream that will get rid of your dark spots and even out your skin complexion.

How To Use Carotone Face Cream:

Scoop some of this cream and gently massage it into your skin until it is completely absorbed.

It cost N500 in markets and cosmetics shops.

Where To Buy Carotone Cream:

You can buy the original cream online from trusted vendors either on Jumia or on Konga. 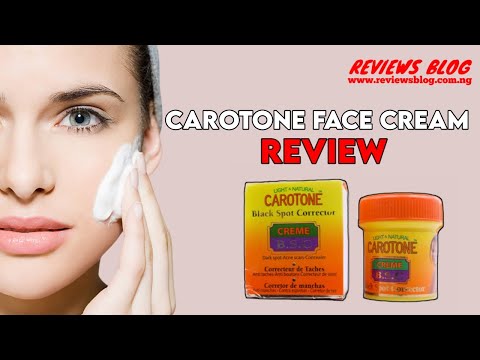