Home » Creams & Lotions » Carotone Cream Review: What Nobody Is Telling You

Carotone Body Lotion is specially formulated to lighten up your skin complexion in a short period of time. It has sun protection and smoothens, softens, tones and brightens up your skin fast.

It intensely lightens your skin and reduces the appearance of hyperpigmentation, freckles and blemishes. It also replenishes your body and stimulate skin regeneration and cell turnover.

But there is a stigma associated with carotone body cream because of how much they say it has damaged the skin of many users around the world. The hate some people have for this body cream, you dare not mention it in front of them.

It is one of those products that causes people to raise eyebrows if they find out you’re either using it or about to purchase it. But then, this carotone doesn’t deserve the bad reputation it has for ruining the skin of countless number of people.

This product according to me is innocent of the claims and the real culprit for the damages done are the users themselves. Carotone body cream unlike other skincare products didn’t lie about the fact that it contains 2% hydroquinone in it.

Hydroquinone is a very potent chemical given as a prescription to be used for not more than three months to treat hyperpigmentation, blackheads, blemishes, freckles, melasma, pimples marks and acne scars. It is an active ingredient that is meant to inhibit excessive melanin production.

So in essence, any skin product that contains this hydroquinone should be treated in the exact same way as a prescribed medication. It should not be used for long term else it becomes an abuse and then causes different side effects.

The reason why so many people claim that this carotone body lotion ruined their skin is because they either abused it or didn’t know how to use it. Many people are ignorant of the fact that it contains hydroquinone, while others don’t just care about the ingredients or what they can do.

It is important to make research before using any product. Try to find out about the ingredients and what they do. Check if you’re allergic to any of them before making purchase. This will save you the headache of having any side effects you will later start looking for solution to thereafter.

Any product that contains hydroquinone in it is enemies with sun and heat. So you should avoid sunlight while using the cream or only use it at night to prevent stories that touches the heart.

Don’t rub carotone body lotion and start frying akara or roasting maize by the roadside. Please don’t apply this cream and go hawking under the sun. This cream is very potent and would very much damage your skin with reckless abandon.

The only downside of carotone body lotion for me is that; it makes your towel stinky dirty. Apart from that, it is a good cream if used for a short time in moderation and away from hot sunlight.

Is Carotone Lotion a Bleaching Cream?

How Good Is Carotone Lotion:

It is a really good cream that would clear your skin and make your complexion very beautiful.

How To Use Carotone Cream:

Pump out some amount of the lotion on your palm and gently massage it all over your body until it is completely absorbed into your skin.

How To Know Original Carotone Cream:

The original carotone lotion has both English and French written at the back of the container while the fake one only has English writen on it.

It cost N1800 in markets and cosmetics shops.

Where To Buy Carotone Cream:

You can buy the original cream online from trusted vendors either on Jumia or on Konga. 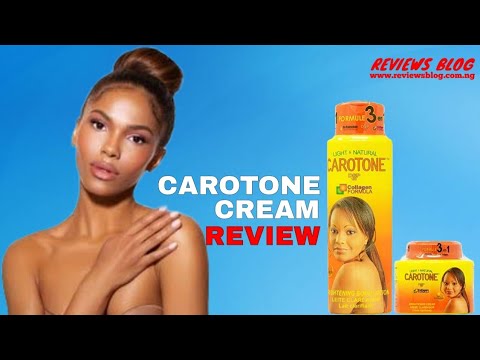