Pure White Gold Lotion is a very fast lightening cream specially formulated with six vegetable oils, plant extracts and some antioxidants. It is an oshaprapra lotion that transforms your skin.

This lotion is specially designed for any kind of hyperpigmentation problem. It is an intense skin lightening lotion that gives you a very beautiful complexion. It exfoliates dead skin cells and makes your skin smooth, bright and radiant.

I got to know about this lotion when an aunty of mine who lives in the village came to visit and live with us for some time. As we were talking one day, she told me about a friend of hers who now lives in the city but came home recently and she could not recognize her former classmate.

She said the lady who was chocolate skin like her during their secondary school days is now very fair and her complexion was glowing. She jokingly asked the friend the secret of her new beautiful skin and the lady didn’t hesitate to tell her it was pure white gold cream and the soap.

My aunty started looking for this cream but couldn’t find it anywhere in the village and so she was hopeful that she would get it when she visit us. I assured her that there’s no cream she cannot find here, as long as she can afford it.

So I took her to the supermarket where I buy my skincare products the next day and immediately I looked at the shelf where all creams are being displayed; my eyes caught the pure white gold cream and I called her attention to it instantly.

She bought the lotion and we went home. She now gave me her old cream which was the same as mine because she couldn’t wait to start using the pure white gold lotion. My aunty immediately started using this cream the next day morning.

In about 7 days of using it, she became fair and her skin was smoother. In just 3 weeks of using this cream, she was already three shades lighter and everyone was asking her what she is using.

The lotion got finished and she hurriedly went to the supermarket to purchase the cream without informing me or asking me to go with her. The attendant who sold it to her convinced her to buy it with the serum and soap for better result.

She concurred and bought everything as told. She came home and immediately she mixed the whole serum with the cream without even telling me to at least hear my own opinion. She also started using it with the soap that very night.

Lo and behold; In one weeks, she started having stretch marks, green veins, dark knuckles and white patches all over her body. Her feet became dark and her legs were uneven. Everyday she woke up to a new skin problem and the ones that were already there were getting worse.

That was when she now came to me and started complaining that she doesn’t know what’s going on with her body, that she no longer understands the pure white gold cream and why it is now giving her all these side effects all of a sudden.

I then advised my aunty to call her friend, since she also uses the same cream and would know better. She now called the friend and put it on loudspeaker for me to hear their conversation.

The friend picked up the call almost immediately and after they exchanged pleasantries, she now narrated what she was going through to her. The lady told her that she has been using this same cream with the soap for the past six months and she has not experienced side effects till date.

That maybe she mixed it with something or got the fake one that’s why it’s reacting badly to her skin. It was at this point that my aunty admitted to her friend that she had mixed the second one with the serum of the lotion to get better result as recommended by the seller who sold it to her.

The friend got angry on hearing this and called her “I too know”. She continued by asking my aunty if she had told her that she mixed her own cream with any serum or whatsoever oil. She immediately ended the call in anger and my aunty became sad and even more confused on what to do because she was hoping the friend would propel some solution to her problems.

I told her to calm down, that I would make research about the cream and get back to her with solutions to the side effects. I gave her back her old cream and asked her to discontinue using the pure white gold lotion immediately.

From my research I found out that the people who mixed the pure white gold cream with oil, gel or serum either from the brand or some other company experienced more side effects than those people who used the cream alone.

The pure white gold lotion is already very potent on it own. So when you mix it with the serum, it becomes too strong for the skin and starts to give you numerous side effects on the body. It is a very good cream if used in moderation, away from hot sunlight and for a short period of time.

No, it doesn’t contain hydroquinone.

Where Is Pure White Gold Cream Made:

It is made by UNIPARCO in Senegal.

It is a really good cream that would clear your skin and make your complexion very beautiful.

How To Use Pure White Gold Cream:

Pump out some amount of the lotion on your palm and gently massage it all over your body until it is completely absorbed into your skin.

1: PURE WHITE COSMETICS is boldly imprinted on the container of the original lotion while the fake one has it written on the wrapper instead.

2: The original cream has NAFDAC registration number written on it while the fake one doesn’t.

It cost N1800 in markets and cosmetics shops.

You can buy the original cream from trusted vendors online either on Jumia or on Konga. 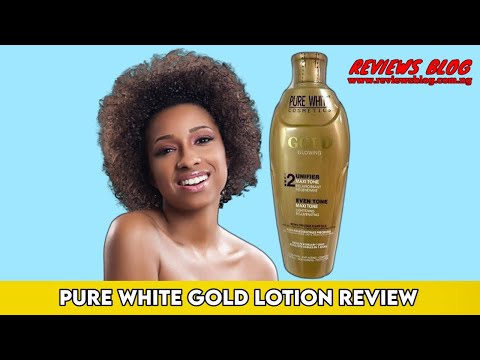